The history of Wawel "bricks" 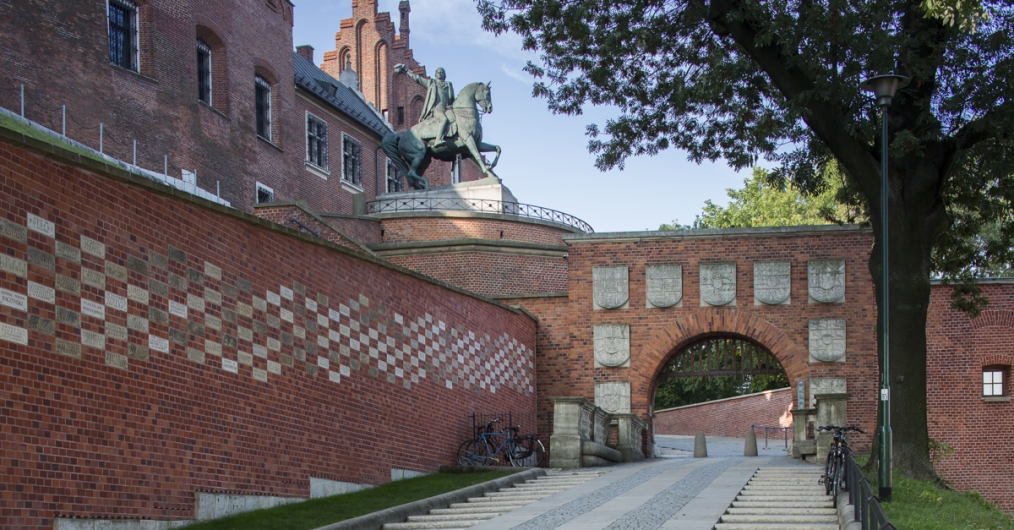 Entrance to Wawel from Kanonicza Street with the "brick" wall, condition in 1922; photo: Stanisław Mucha (1895–1976). Wawel Royal Castle
Bricks – stone tablets with names of donors for the restoration of Wawel, embedded in the retaining wall, constantly arouse the interest of everyone who goes up the hill from Kanonicza Street.
The difficult economic situation of the Second Polish Republic, which was recovering from 123 years of partitions, resulted in a lack of funds for the Wawel restoration, conducted since 1905. This threatened to interrupt the work done so far. Adolf Szyszko-Bohusz, from 1916 Head of the Board for the Restoration of Wawel Castle, in 1921 made an appeal in the press - including “Ilustrowany Kurier Codzienny” – asking the public to make donations for this purpose, and the bricks are the result of commemorative initiative. It was decided that each donor of 30,000 marks (the cost of one day of restoring the castle), or persons subscribing such a sum with small amounts through personal fund raising lists, would have the right to put a short inscription and possibly their name on a stone block embedded in the fortress wall. In addition, each donor received a diploma designed by Szyszko-Bohusz.
In the face of rampant inflation, it was agreed that the sum for each payment would be around USD 10. 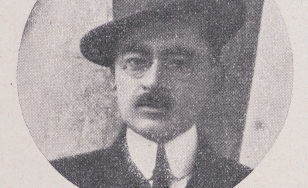 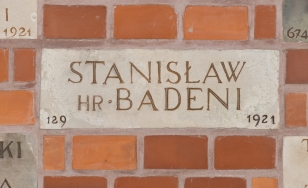 One of the "bricks" (nos. 124–129) dedicated to Stanisław Badeni (1877–1947), Marshal of the Diet of Galicia and Lodomeria, member of the Austrian Herrenhaus, guardian of the purchase of the Wawel castle from Austrian hands, condition in 2019

The appeal met with a wide response in the country and abroad. Schools, offices, institutions and private persons donated money for the restoration of Wawel. The first donor was the American philanthropist and Slavophile John Whipple Frothingham (1878–1935). During the First World War he managed the operations of the American Red Cross in Serbia. The payment was made on 20 January, 1921, the day after Szyszko-Bohusz's appeal in the “Ilustrowany Kurier Codzienny”. The same "IKC" (issue of January 21) contained information about this event. 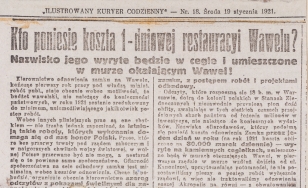 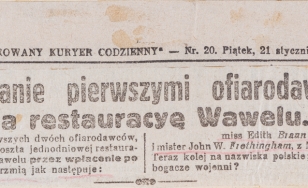 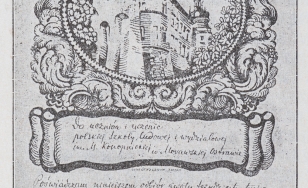 The first bricks were placed in the wall on January 25, 1921. They were mounted in a chessboard pattern of four vertically, then more densely - one next to the other. Unfortunately, this had negative practical and aesthetic consequences.
The setting of bricks in the perimeter walls was later discontinued. The last entry in the Construction Log, dated 20 June 1923 reads: Bricks were embedded and the blacksmith made staples for them. The Wawel archive contains an incomplete collection of designs of inscriptions to be applied on bricks, for monumental masons. The last preserved is brick 3848: IM∙ KLEMENTYNY / NEPROSOWEJ / EDMUND LIPIŃSKI / and HENRYKOSTWO / DE PHULL, entered as paid for in June 1922 (Day No. 2171). On 22 March 1926, Szyszko-Bohusz summed up the increasingly weakening campaign in "Tygodnik Ilustrowany" and "Kurier Warszawski" and thanked the newspapers for their involvement. Until then, 6,282 bricks had been funded to the amount of 548,670,000 marks and 13,300 zlotys. The Head of the Board for the Restoration of Wawel Castle presented a detailed report on how these sums had been spent. At the same time, he promised that the Wawel brick fundraiser would be resumed. 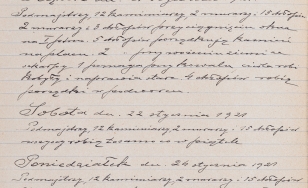 A note in the "Construction Journal" about the start of placing "bricks" in the wall. Wawel Royal Castle 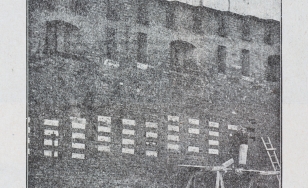 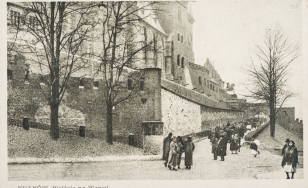 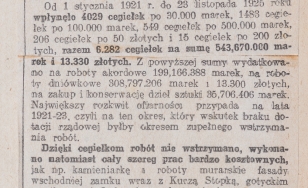 An attempt to commemorate all donors

In 1939 a new solution to this commitment was outlined by Szyszko-Bohusz in the Pantheon – his third concept of arranging the hill, where he designed a “rotunda” for this purpose in front of Kanonicza Street, to replace the turret on the corner, from which the brick wall began. Concept sketches and a detailed cost estimate have been preserved in the Wawel archive. However, the implementation of the project was prevented by World War II.
With the passage of time, and as a result of subsequent work on the wall, some of the bricks were completely destroyed. The source that makes it possible to identify the names of all the donors are their lists kept in the Wawel archive. The number of bricks, largest in 1921–1924, decreased over time. The whole fundraiser lasted until 1936 and was closed with 6329 bricks. 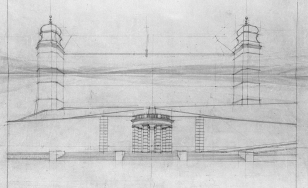 Design sketch of the "Brick Pantheon" in place of the corner turret by Adolf Szyszko-Bohusz, 1939. Wawel Royal Castle 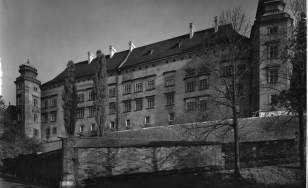 The bricks escaped destruction during World War II. However, in 1953, Castle Management (a representative of the Office of the Council of Ministers on Wawel Hill) decided, under the guise of poor condition of some of the bricks, to remove more than a thousand tablets from the lower part of the wall. It is not known which bricks were removed at that time, as no files related to it have survived. The condition of the bricks after 1953 is documented in the publication of Franciszek Fuchs, Olga Łaszczyńska and Jadwiga Prus Cegiełki wawelskie (Cracow, 1973). The bricks then existing in the wall and still legible were marked with crosses on the list. The number of 735 bricks given in Łaszczyńska's text probably refers to bricks with legible inscriptions. Inventory made prior to conservation work in 1996–1998 showed 809 bricks in the wall and 15 in the lapidarium. During the earthwork, 26 more bricks were found in the rubble from the side of the slope. Some of them had been preserved in good condition, this confirming that the selection made in 1953 had an ideological rather than a technical and conservation aspect. In the above – mentioned publication we find traces of censorship. 40 censored bricks have been identified. They were mainly bricks dedicated to soldiers killed in the battles against the Bolsheviks, in which the text was shortened.

Thanks to the subsidies of the Social Committee for the Restoration of Cracow, conservation of the section of the perimeter wall from Podzamcze Street to the Heraldic Gate. The basic conservation target was to preserve the architectural form from 1921–1922, with a checkered arrangement with four bricks in one vertical row, as part of the architectural composition of the northern approach to Wawel, including the Heraldic Gate (Szyszko-Bohusz's design). Due to the limited space in the wall, it was impossible to complete the set of bricks with all the items which had been funded. The obligation to commemorate all the donors, in addition to archiving documents, was met by publishing their list in book form. However, the principle was adopted that in the case of bricks with repetitive text only the best preserved would be restored, and the space freed up in this way would be filled with bricks stored in the lapidarium, found during earthwork, as well those made according to the List of Founders (Spis fundatorów). This made it possible to commemorate more people and institutions on the wall. The supplemented bricks from the List of Founders were selected by Dr Andrzej Fischinger, then director for castle restoration, according to the following criteria: significance for Polish history and culture, services to Wawel, and multiple payments. These changes did not affect the architectural composition of the wall, but significantly enriched its importance as a record of history. In 2013, the so-called brick wall was restored again. 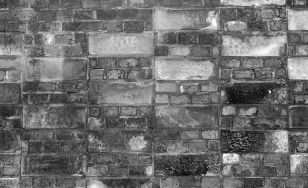 Currently, there are 788 bricks in the wall and 386 in the lapidarium. In the archives of the Wawel Royal Castle, some of the brick designs from 1921–1925 have been preserved, made mainly on various types of wrapping paper (317 two-sided, 5 one-sided, altogether 639 designs + one secondary design) as well as 10 diplomas, mostly donated to the Wawel Castle.
The commemorative Wawel brick fundraiser proved that Wawel - in a free Poland - was the object of special care of the whole society, and its restoration was of great importance.

In the published work Cegiełki wawelskie (Kraków 1972) by Franciszek Fuchs, Olga Łaszczyńska and Jadwiga Prus, it is possible to find traces of the censorship dating back to the Polish People’s Republic. 40 censored bricks related to fighting for the future shape of the eastern border were identified. These are mainly bricks dedicated to soldiers killed in the battles against the Bolsheviks in 1919–1921. The text has been shortened. Censored items include, among others, the dates and names of the places where the battles took place. For the same reason, two bricks (nos. 834, 2383) dedicated to Józef Piłsudski (1867–1935) were censored, but two others (nos. 298, 299), founded by the Marshal were left. The brick of the 1st Krechowiecki Uhlans Regiment (no. 2138) was also censored by removing the name of its patron - Colonel Bolesław Mościcki (1877–1918). During the First World War, Mościcki, in command of the 1st Uhlans Regiment of the First Polish Corps in Russia (later Krechowiecki uhlans), fought a victorious battle against Bavarian troops on 24 July, 1917 at Krechowce. He died on 18 February, 1918 near Łuniec, killed by Bolsheviks and armed peasants, while breaking through the Bolshevik-German front in disguise in order to communicate with the Regency Council of the Kingdom of Poland. The censors also shortened the text of two bricks dedicated to Teresa Grodzińska (1899–1920), a heroic Polish nurse, murdered during the Polish-Bolshevik war. Posthumously, she was awarded the Order of Virtuti Militari (no. 1023 and 2302 – as a single brick supplemented in the wall during conservation work in 1996–1998).
The second group of censored bricks concerns participants in the Polish-Ukrainian war (1918–1919), including the defenders of Lviv (nos. 3558, 4189, 4260, 5261).
Brick no. 5200, dedicated to soldiers killed in seizing the neutral Polish-Lithuanian belt, was also censored. A demilitarized zone was created on December 17, 1920 to separate the fighting forces after the capture of Vilnius on October 8, 1920 by General Lucjan Żeligowski (1865–1947) and the proclamation of Central Lithuania, and liquidated on May 22, 1923.
In brick No. 5265, dedicated to Archbishop Jan Cieplak (1857–1926), censors removed the word martyr. The sufragan bishop of Mohylev, as the highest ranking representative of the Roman Catholic Church in the USSR, was arrested twice: in 1920 and 1921. On March 21–25, 1923 he was tried in a show trial in Moscow. Along with 14 other clergymen, he was sentenced to death. Under the pressure of world public opinion and after a warning from the Polish government, the sentence was commuted to 10 years in prison. In 1924, he was expelled from the USSR. He died before taking the office of Archbishop of Vilnius.
LOG IN
REGISTRATION

There is a list of bricks on the subpage. The donation numbers, surnames, donors' names, sentences. 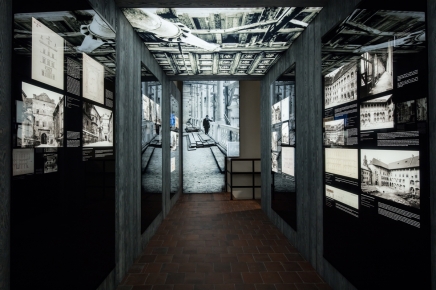 This interactive exhibition incorporates cutting-edge technology, traditional works of art, architectural models, and large-scale illuminated reproductions of archival photographs to tell the story of Wawel Hill from the end of the 18th century to the end of the 20th.