scroll down
In Karol Lanckoroński’s collection, hanging in the stairwell of his celebrated residence at Jacquingasse 18 in Vienna, were four Italian landscapes of nearly identical dimensions painted by the renowned German landscape painter Jakob Philipp Hackert. In the visitor’s guide – a small brochure entitled "Palais Lanckoroński Jacquingasse 18" published in 1903 – they are listed as a set: “four pictures by Jakob Philipp Hackert.” After World War II, they were removed from Vienna along with the rest of the collection. At some point they were sold and entered a private collection. In 1971, they were put up for sale at the Gebhardt gallery in Munich; they reappeared on the art market in 2013, at the Lempertz auction house in Cologne. In autumn of 2020, all four were auctioned by Christie’s in London.

Jakob Philipp Hackert (1737–1807) was the most talented of the five artistically gifted sons of the painter Philipp Hackert. Educated in Berlin and Paris, he spent his career in Italy. He went to Rome in 1768 and eighteen years later moved to Naples where he became court painter to King Ferdinand IV. In Italy he befriended the successor to the Russian throne, Archduke Paul Petrovitch and his wife Sophia von Württemberg, which opened the doors to other lucrative commissions. As the leading German landscape painter of his day, his clientele included wealthy travelers touring Italy, European aristocrats, royalty, and the clergy.
He painted atmospheric landscapes of Campania and Sicily, harbor views, hunting scenes, waterfalls, and natural phenomena such as spectacular volcanic eruptions. His landscapes were at once realistic, meticulously rendered and topographically faithful, and idealized in the spirit of Claude Lorrain and Nicolas Poussin. He painted his compositions from sketches drawn on his numerous walks in the countryside.

Hackert’s landscapes were extremely popular. According to Johann Wolfgang von Goethe, the artist’s first biographer, clients had to wait for up to six or seven years for their commission! The prosperous and carefree life the artist led in the glow of fame and the good graces of the king ended with the entry of Napoleon’s army into Italy in 1799. The loss of royal patronage forced Hackert to leave the Kingdom of Naples; he resettled in Tuscany. However, his fame as a landscape painter endured and his pictures continued to sell extremely well, in part thanks to his extensive social contacts and friendships. He died in San Piero di Careggio (now Careggi) near Florence. 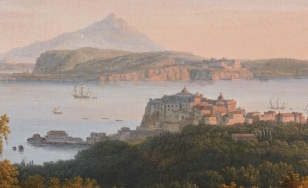 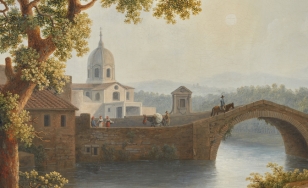 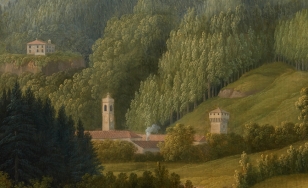 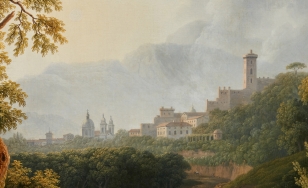