scroll down
The exhibition “The Royal Bestiary: Wilkoń at Wawel” presents the rich and multifaceted work of Józef Wilkoń, the beloved illustrator, especially of children’s literature, painter, and sculptor. This is the world-renowned artist’s first exhibition at Wawel Royal Castle.
Presented in three Wawel venues – the magnificent Renaissance Royal Gardens at Wawel Royal Castle; in the garden of at Pieskowa Skała Castle, perched on a cliff in Ojców National Park; and in the late 16th-century Manor House in Stryszów – the exhibition comprises a total of 52 sculptures and 42 works on paper. The outdoor locations are not only the perfect setting for the whimsical sculptures of the nature-loving artist, but also present an ideal opportunity to discover the region’s cultural heritage.
Curated primarily with our youngest visitors in mind, the exhibition is sure to delight children and adults alike. The admission ticket encompasses all three locations and includes a contest with special awards (details below).

The division of the exhibition among three venues is intentional. Presenting the animal sculptures in the Royal Gardens at Wawel Castle makes reference to both the living royal menagerie of the last Jagiellonian kings and the animals woven on the tapestries in the collection of Sigismund II Augustus. Exotic animals such as lions, panthers, and crocodiles, as well more familiar wild boars and a moose prowl among the greenery. The introduction of contemporary sculptures into the historic spaces of Wawel Royal Castle speaks to the correspondence between the arts, and opens a dialogue between the old and new, the past and present.

Józef Wilkoń’s most recent sculptural creations are presented in the garden at Pieskowa Skała Castle. There, figures of animals and people emerge from hornbeam logs. This part of the exhibition reveals the artist’s exceptional bond with nature, from which he draws endless inspiration. Among the sculptures displayed here are bats, the symbol of Ojców National Park, where the castle is located.

The Manor House at Stryszów

The exhibition at the manor includes sculptures of Polish noblemen that Wilkoń created especially for the Wawel exhibition. They are exhibited in their “natural setting” – a former residence of the gentry. Wikoń’s earliest works on paper are illustrations inspired by his bucolic childhood in Bogucice, the small village in the Małopolska countryside where he was born and raised.

Józef Wilkoń (b. Feb. 12, 1930) is a celebrated Polish illustrator, painter, sculptor, poster artist, and set designer. He has illustrated over 200 books for children and adults published in Poland and abroad, and is also the author of more than a dozen children’s books.

His work has been shown in well over 100 exhibitions in galleries and museums throughout Europe and Asia, including the Centre Pompidou in Paris (1989), the Zachęta – National Gallery of Art in Warsaw (2006), the Albus Gallery in  Seoul (2017), and the Chihiro Art Museum Azumino (2019) in Japan, among many others. Wilkoń’s works are found in private and public collections on five continents including such museums as the Musée de l’Illustration Jeunesse in Moulins, France, the Adam Mickiewicz Museum of Literature and the National Library in Warsaw, and in Japan in the Museum of Picture Books in Oshima, and the Chihiro Art Museum in Azumino.

The artist’s most recent major projects include illustrations for Polish editions of Rudyard Kipling’s Jungle Book (Księga dżungli, 2009) and Miguel de Cervantes’s Don Quixote (Don Kichote, 2016), and Pan Tadeusz (2015). The children’s book Psie życie [A Dog’s Life], written and illustrated by Józef Wilkoń, was touted “The Most Beautiful Book of 2011” by the Polskie Towarzystwo Wydawców Książek [Polish Association of Book Publishers] and was awarded the bronze medal at the 50th anniversary Best Book Design from all over the World competition in Leipzig.
Exhibition Organizers: The Ministry of Culture, National Heritage, and Sport; Wawel Royal Castle; and Fundacja Arka im. Józefa Wilkonia

Honorary Patron: Iwona Gibas, Member of the Board of the Małopolska Voivodship 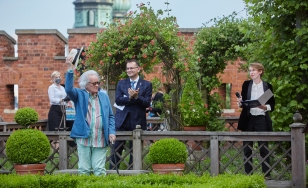 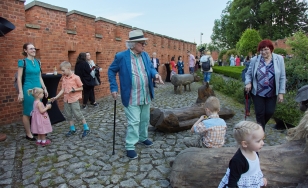 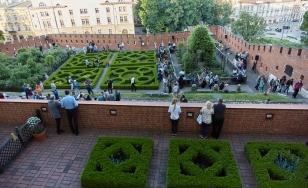 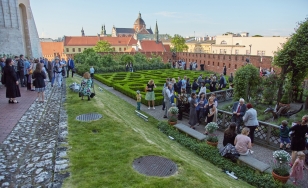 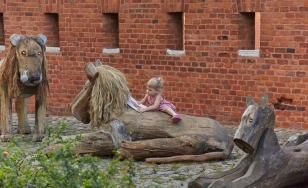 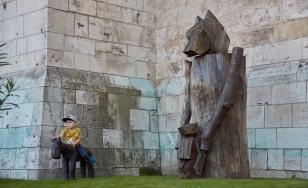 The ticket entitles the bearer to visit all three exhibition locations.