The exhibition of outdoor sculptures in the gardens of the Wawel Royal Castle celebrates the 50th anniversary of the construction of the Wawel Dragon statue. Examples of the artist's oeuvre are also exhibited in the Bolesław Chromy Gallery in the Decius Park in Kraków.

lt is hard not to come across Bronisław Chromy's works as you walk around the Wawel Hill. Nestled among the trees on the Planty Garden Ring encircling the Old Town, there are three stone Owls dating from 1959. Near the Kossakówka manor house, a group of three monumental eagles from 1992 stands as a remarkably vivid monument to the Soldiers of Fighting Poland. T he Czerwieński Boulevard is home to Dżok the Dog, an artistic tribute to a dog's unflagging fidelity; the story encapsulated in the sculpture is still moving even today. Yet it is towards the statue of the Wawel Dragon that all those walking the boulevard inevitably direct their steps.

He was born in 1925 in Leńcze near Lanckorona and died in 2017 at the age of ninety-two in Kraków, where he had lived and worked since his youth. After graduating from the Secondary School of Fine Arts, he began studies at the Academy of Fine Arts in Kraków. A student of Xawery Dunikowski, he graduated in 1956. He was professor at the Academy of Fine Arts in Kraków and a member of the Polish Academy of Arts and Sciences. A man of great heart, Bronisław Chromy was highly popular in Kraków's artistic and cultural circles, and his numerous artistic and social endeavours made him a loved figure among the city's inhabitants. Bronisław Chromy owed his farne as an artist in an equal measure to his monumental sculptures, figurines, medals, paintings and graphic art. Thanks to his talent, indefatigable energy and assiduity, he worked almost until the age of ni nety, producing arts of work in his signature style that made them so uniquely distinctive.

Bronisław Chromy's works are highly universal both in terms of the means of artistic expression he employed and the subjects he explored. The breadth of this outstanding artist's oeuvre includes numerous monuments, outdoor sculptures, figurines and sacred art works that have earned him a permanent place in the hi story of Polish art and culture. He explored a broad range of topics in his art. Particularly worthy of notice are sculptures inspired by historical, martyrological, cosmological and animalistic themes, many of which can be adm i red in the Bronisław Chromy Gallery in the Decius Park in Kraków.

However, Bronisław Chromy is best known for his statue of the Wawel Dragon whose farne extends far beyond the borders of Poland. Originally, the statue that was to become Kraków's most recognizable symbol had been designed as a fountain and was to be located elsewhere. In 1960, Kraków announced three competitions for the design of city fountains, all of which were won by Bronisław Chromy. The fountain with a dragon figure was to be located on the Wolnica Square. When the sculpture had been completed, the artist's studio was visited by the the n mayor of Kraków Zbigniew Skolicki who thought that it would better serve the purpose if it stood at the foot of the Wawel Hill. He managed to en list the support of the Director of the Wawel Royal Castle, Professor Jerzy Szabłowski, and this is how the Wawel Dragon took its place in front of the Dragon's Den where it has been breathing fire for fifty years now. The Wolnica Square, on the other hand, was adorned with another of Bronisław Chromy's works, the Three Musicians fountain, which stands there to this day.
Curator: Grażyna Chromy-Rościszewska
Exhibition coordinators: Julianna Karp, Joanna Kazubowska
Conservators: Grażyna Chromy-Rościszewska, Daniel Bednarczyk


Project co-financed by the Municipal Office of Kraków 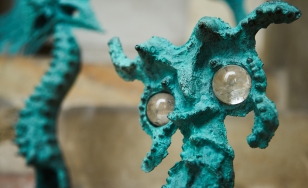 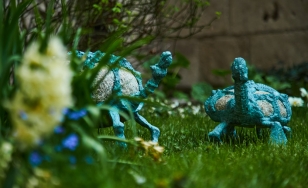 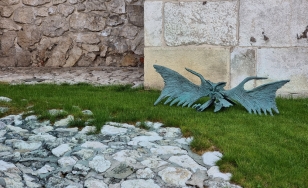 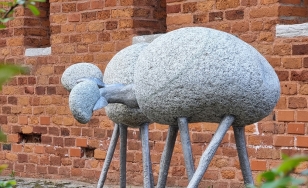 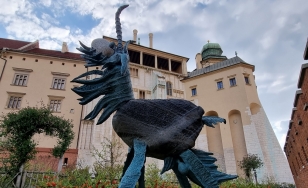 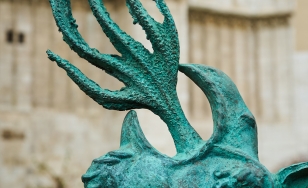 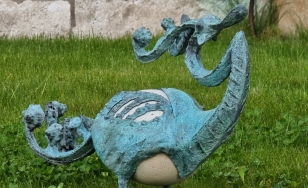 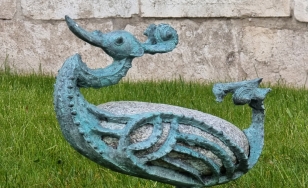 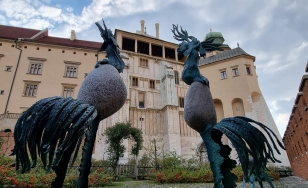 exhibition located in the royal gardens