Already over 100,000 people have already seen “All the King’s Tapestries: Homecomings 2021 – 1961 – 1921.” But all good things must come to an end. So Wawel Royal Castle is holding a week-long closing celebration – “Farewell to the Tapestries” – which will take place October 18–24. Don’t miss this once-in-a-lifetime chance to see the entire royal tapestry collection preserved in Poland. The closing celebration includes extended hours, reduced admission, discounts on catalogues and other publications, and a free multimedia show – the suspense-filled story of the tapestries told with music and light – in the castle’s Arcaded Courtyard.

If you haven’t seen the exhibition yet, time’s running out. This – the biggest ever exhibition of the tapestries of Sigismund II Augustus in the museum’s history – will probably never be repeated. It’s an exciting, inspiring show that I guarantee you won’t forget. The sleek, contemporary exhibition design highlights one of the premier tapestry collections in Europe without detracting from the splendid historic interiors of Wawel Castle. Don’t miss it! – Prof. Andrzej Betlej, Director, Wawel Royal Castle.

THE COMMISSION OF THE POLISH KING

The 16th-century audience was impressed with the tapestries’ sizes and the sparkle of gold and silver threads. The contemporary audience standing before biblical tapestries will discern, among other things, references to the masters of the Italian Renaissance – Raphael and Michelangelo. Before us, there are 137 royal tapestries captivating with their exquisite craftsmanship.

Among them are 19 monumental figurative fabrics depicting scenes from the Book of Genesis (Paradise Bliss – 189 in x 336 in, Animals Entering the Ark – 187 in x 312 in, The Building of the Tower of Babel – 190 in x 320 in), 44 verdures depicting landscapes and animal scenes (An Otter with a Fish in its Mouth and Fantastic Reptiles, A Unicorn-Giraffe and a Lynx, Stork and rabbits), 42 armorial tapestries (a grotesque with coats of arms of Poland and Lithuania and the figure of Ceres) and also small furniture upholstery and fabrics for decorating window recesses. Visitors did not have an opportunity to see many of these before.

“The creation of such an extensive tapestry collection in 1550–1560 in Brussels, commissioned by one ruler, is unprecedented in Europe. It is the biggest of its kind private – royal undertaking, arising from Sigismund Augustus’s passion for collecting. He collected, among other things, jewellery and works of handicraft. I am glad that we have returned to a fine tradition of organising exhibitions in historical spaces – representative and private chambers”, explains Jagiellonian University professor Andrzej Betlej, PhD, Director of the Wawel Royal Castle.

A JOURNEY THROUGH TIME AND SPACE

The exposition creates the atmosphere of castle interiors ceremonially decorated with tapestries, just like it used to be done in the past for special occasions. It also narrates the story of the conservators’ arduous work as they struggled with the effects of damage that had affected the tapestries during their turbulent history.

Since their return from Russia in 1921, a lengthy tapestry preservation process has begun. “Most of all, it is a significant work of Wawel conservators. In the Senators’ Hall, where armorial tapestries are displayed, you can also view a recently restored tapestry. It ‘regained’ its colours to a certain extent; it stands out from the other tapestries. I can say that it will be possible at the exhibition, thanks to particular means, to see some tapestries’ original colour schemes!”, says Andrzej Betlej, PhD.

However, the Director of the Wawel Royal Castle underlines that the concept of the exhibition, contained in the word “homecomings”, is surprising and inapparent. For in a reverse narrative, we will begin in contemporary times and then follow the next homecomings of the tapestries: in the years 1961 and 1921.

The contemporary touch of the exposition is created by the works of Marcin Maciejowski and Mirosław Bałka. “We want to show that Sigismund’s tapestries inspire contemporary artists. Marcin Maciejowski created his first painting that referred to the tapestries during his studies at the Academy of Fine Arts. He has now offered us a new piece of work, “A Visit to Wawel”. Mirosław Bałka prepared – with our exhibition in mind – two installations. We will see ‘Three Rays’ in the Wawel Castle’s courtyard. The second installation, called ‘Passport’, will open the exposition along with Maciejowski’s painting”, the Director of the Wawel Royal Castle says.

The exhibition is complemented by archival photographs showing the royal tapestries in surprising socio-historical contexts. We will see, among others, a picture of Brigitte Helm – the star of the film Metropolis (1927) directed by Fritz Lang, as she visited Wawel and admired Sigismund’s collection.

A symbolic return of Sigismund Augustus’s tapestries to the Wawel Castle exhibition has been planned for 2021 intentionally, on the crucial anniversaries of two earlier homecomings. On March 18, 1961, an important display of the royal tapestries was held in the castle chambers to celebrate their return from Canada, where they had found shelter after many years of wandering through war-torn Europe.

The second of the eponymous homecomings was made possible by a peace treaty signed one hundred years ago, on March 18, 1921, in Riga. The treaty that sealed Poland’s victory in the war with Soviet Russia facilitated the revindication of thousands of works of art and other pieces of cultural property taken to tsarist Russia during the Partitions of Poland. The treaty also sanctioned the return of Sigismund Augustus’s tapestry collection, looted during the third partition in 1795.

The exhibition at the Wawel Castle not only commemorates the moments of the collection’s homecomings, but is also dedicated to people who rescued the tapestries and made it possible for them to be returned to the castle, among others: to Stanisław Świerz-Zaleski, Józef Krzywda-Polkowski, Jerzy Szablowski, Witold Małcużyński, and also to the people who fought for their revindication from Russia – Aleksander Czołowski and Marian Morelowski. We wanted to mark their devotion to the search for the tapestries, their endeavours to retrieve the treasures and care for them. This is why, apart from holding the exhibition, we decided to commemorate these distinguished people with a special memorial which will be revealed during the vernissage.

“The exhibition will be held for half a year. Still, I would like it to be remembered forever – as a monument of the importance of the royal foundation, a commemoration of those who built the collection and those who cared for it for centuries. We will not let it be forgotten. For this purpose, we have published several books on the tapestries: the republication of the catalogue, a new collection of studies and an album in eight language versions. Of course, there is also the exhibition catalogue”, Andrzej Betlej, PhD, acknowledges.

MASTERPIECES IN THE GENRE

It is worth noting that the tapestries’ creators drew their inspiration not only from the works of the greatest artists but also from bestiaries and floristic and zoological compendia. Michiel Coxcie, the author of the biblical tapestries projects, was referred to as the “Flemish Raphael”. The Wawel tapestry collection formed the so-called first edition, a model for replicas and travesties that came later.

The collection of Wawel Tapestries was woven in the years 1550–1560 in excellent workshops in Brussels, the global metropolis of tapestry art of those times. The fabrics were made from wool, silk and silver threads or gilded silver threads. The masterpieces designed by the authors of cardboard paintings were created at the request of King Sigismund Augustus as part of a collection comprising approximately 160 tapestries intended for the decoration of the Wawel Royal Castle. It is the most extensive set of this type of fabrics that has ever been made at the request of one person.

Mirosław Bałka’s Three Rays installation will be displayed in the arcaded courtyard from March 18. It refers to the process of creating tapestries and to the threads used to weave them. Three threads, stretched between the columns of the courtyard’s floors like strings in a Renaissance instrument, will play a subtle tune, engaging in a dialogue with this Place’s harmony and beauty. They will initiate a discourse on the order, discipline and beauty of the times in which the tapestries were created. They will create a piece referring to haiku poetry – built from the castle’s architecture, the dividing line and the architecture of the sky above. The Three Rays, by “sewing together” the arcaded courtyard, remind us of the technique and process of creating tapestries. They also remind us of the touch of the tapestry makers’ hands which is invisible for the audience but essential to making any artistic vision come to life.
Bałka’s second installation, Passport, consists of “portraits” of the chests used to transport the national treasures (including some tapestries) from Canada to Poland in 1961. The “portraits” were taken in a passport photograph fashion. The particular background, lighting and position of the object before the lens guarantees the objectivity of the presentation and retains each chest’s individual qualities. The chests are immortalised because of their significant role: they protected and secured the tapestries during their transport to Poland, they stayed in close relations to them, and they played the role of couriers crossing the borders. When we look at them, we think of the people who carried them and saved our national treasures. 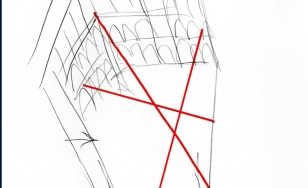 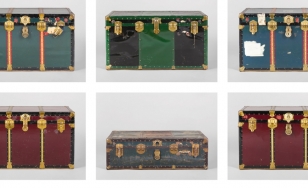 In the fall of 2020 I decided to head up to Wawel, because I was exploring issues surrounding the royal tapestries at the time. In the middle of the pandemic, at a time of global unrest, I discovered a harmony and a marvelous optimism for the world emanating from those Renaissance textiles.
The following day, the coronavirus precautions were to mean that all of the country’s cultural institutions were closed to visitors. Today’s the last chance to see the tapestries in real life, I thought, and I called out to my partner, Patrycja: “Hey, no telling how many months this ‘culture lockdown’s’ going to last, let’s go!” We hustled to get ready, because there were only two hours left till closing time; luckily my studio’s in Dębniki, not far from Wawel Hill. Unfortunately, however, we mixed up the opening hours and got there just in time to see the Wawel cash desk building close its doors. We felt really disappointed, but couldn’t help smiling at our mistake. What can I say, the closing of cultural institutions had become a real adventure for us.
Darkness was falling. Walking through the outer courtyard, we saw lights in the windows of the castle bookshop, which, it turns out, is open an hour longer than the exhibitions. Of course, we spent that hour browsing through books, museum souvenirs, knick-knacks, and gadgets. We looked through everything that was available on the tapestries, with all the enthusiasm of people who had arrived late for the exhibition, but at the last moment had been given a chance to see something after all. The numerous Wawel postcards with tapestry details were our substitute for viewing the actual tapestries in the Wawel chambers. We were drawn in by the keen natural observations, freely mingling with the imaginations of the Dutch artists. We commented on the reproductions, examining the details of the textiles on the postcards. At that point we really did want to see the tapestries up close. Patrycja began selecting, even photographing some of the postcards with her phone, which struck me as pretty amusing, and I took her photograph as she did so. This shot turned out to be quite sketch-worthy, and it turned into the first drawing for the Visit to Wawel series. With respect to the collection of castle postcards shown here, I decided the canvas would have the proportions and look of a postcard—that explains the WAWEL inscription and the light-hearted, comic-book feel, introduced by using the real conversation.
Visit to Wawel records a spontaneous museum visit in unusual times, when the pandemic period sparked an authentic desire to see the royal tapestries up close and in person.
Wawel Infopress - All the King's Tapestries Bałka and Maciejowski 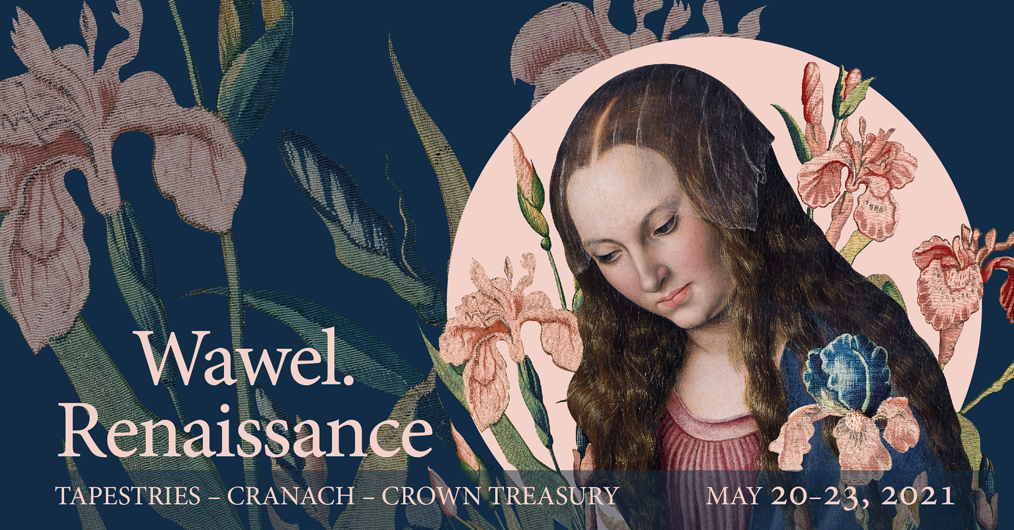 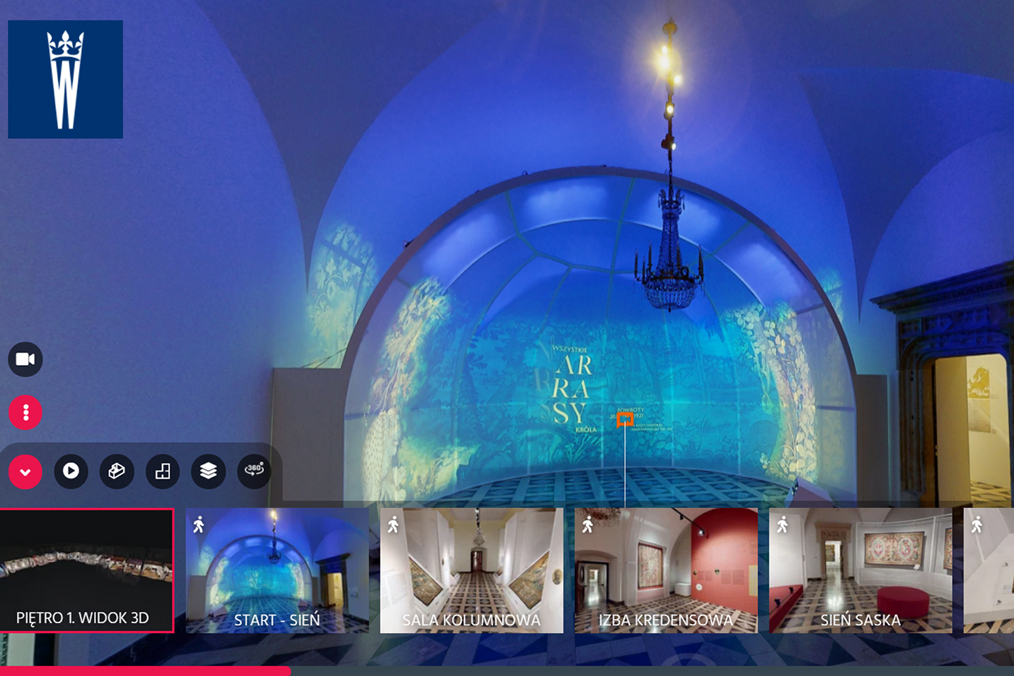