The Wawel Royal Castle and the Wawel Hill constitute the most historically and culturally important site in Po­land.
For centuries the residence of the kings of Poland and the symbol of Polish statehood, the Castle is now one of the country’s premier art museums. Established in 1930, the museum encompasses ten curatorial departments responsible for collections of paintings, including an important collection of Italian Renaissance paintings, prints, sculpture, textiles, among them the Sigismund II Augustus tapestry collection, goldsmith’s work, arms and armor, ceramics, Meissen porcelain, and period furniture. The museum’s holdings in oriental art include the largest collection of Ottoman tents in Europe. With seven specialized conservation studios, the museum is also an important center for the conservation of works of art.

About 20,000 schoolchildren yearly participate in dedicated museum lessons. In addition, many children at­tend workshops and take part in academic and artistic competitions.

The Wawel Royal Castle also hosts a lively program of events including symphonic and chamber music concerts and performances of opera and courtly dance.

The visitor center holds cafés, shops, and other visitor services.

The Wawel Hill is to Krakow what the Acropolis was to ancient Athens or the Capitoline Hill to Rome. The rocky outcropping tower­ing over the banks of the Vistula has been the seat of secular and ecclesiastical power since the early Middle Ages, but in fact there is evi­dence of human habitation on the site dating as far back as the Paleolithic era. Mieszko I (r. ca. 960–992), the first historical ruler and creator of the Polish state, chose the hill as the site of one of his residences. His baptism in 966 brought Poland into the orbit of Western culture. The bishopric of Krakow was established in 1000 and the first cathedral on Wawel Hill was built.

Wawel experienced its golden age from the 14th through the 16th centuries under the last Piast kings and the Jagiellon dynasty. The Jagiellonian kings Alexander I (r. 1501–1506), Sigismund I the Old (r. 1506–1548), and Sigismund II Augustus (r. 1548–1572) transformed the now too small medieval castle into one of the finest Italianate Renais­sance palaces in Central Europe. Sigismund I and his son presided over a great flowering of the arts and humanities.

Wawel’s significance began to wane when Sigismund III Vasa (r. 1587–1632) moved his court to Warsaw in 1609–1611. It remained a royal residence and the cathedral continued to be the site of the coronations and burials of Poland’s kings. The ensuing years brought a slow but steady decline. The castle was sacked and looted during the Swedish Deluge that swept through the Polish-Lithuanian Commonwealth at mid-century. The final blow came in the 18th century with the partitions of Poland; in 1796 the castle was converted to barracks for the Austrian army.

A monumental restoration project was under­taken in the early years of the 20th century and when Poland regained her independence, the castle was converted into a residential museum.

Pieskowa Skała Castle is situated in the heart of the Ojców National Park, about 30 km northeast of Krakow. The fortress and a nearby rock formation called the Club of Hercules dominate the picturesque landscape of the Prądnik River Valley. Pieskowa Skała is exceptional not only for the beauty of its natural setting, but also for its outstanding architecture and fascinating history. The stronghold was built during the reign of Casimir the Great (r. 1333-1370) to safeguard the route between Krakow and Silesia. At the end of the 14th century, the castle passed into the hands of the Szafraniec family. In the late 16th century Stanisław Szafraniec renovated and expanded Pieskowa Skała creating an impressive Renaissance residence with an arcaded courtyard and pillared loggia. The work was completed about 1578. In the 17th century, the castle’s new owner, Michał Zebrzydowski, expanded the fortifications with a bastion, closing off the large exterior court.

Today the castle is a museum, which houses a collection of European art.

BRANCH - The Manor House at Stryszow

Located at the foot of Mount Chełm in the Beskid Makowski mountain range near Wadowice and Kalwaria Zebrzydowska, the manor house at Stry-szów is one of the most interesting and unique monuments of manorial architecture to survive in this region. Built at the end of the 16th century and remodeled in the mid-18th century, the manor is an example of a modest country residence of the Polish gentry.
Since 1969 the manor has been a museum, featur­ing 19th-century furnished interiors.

State Rooms
The exhibition encompasses the largest and most magnificent rooms in the former royal residence. Perhaps the most intriguing is the Deputies’ Hall (also known as the Envoys’ Hall) with its remarkable coffered ceiling decorated with woodcarvings of human heads. Visitors tour Renaissance and Baroque rooms ending with the castle’s largest room, the Senators’ Hall, where the senate met with the king and where grand balls were held. Objects on view include the renowned tapestry collection of King Sigismund II Augustus, royal portraits, Italian and Dutch Old Master paintings, and Italian Renaissance furniture.

Royal Private Apartments
These rooms were once reserved for the personal use of monarchs and their families, courtiers, and guests. Several are decorated with Renaissance furnishings and notable
Italian paintings from the Lanckoroński Collection. Three retain their original Renais-
sance larch wood ceilings, while two also boast original colorful painted friezes. Two rooms in the north wing of the castle are dedicated to exhibiting objects from the Saxon Wettin dynasty, including a collection of Meissen porcelain and silver table settings; two more are furnished in the Neoclassical style.

Crown Treasury and Armoury
The exhibition occupies the Gothic and Renaissance rooms that once housed the Polish coronation insignia and the jewels of the Polish-Lithuanian Com¬monwealth. Today, they house priceless objects from the original Crown Treasury, such as the Szczerbiec coronation sword, heirlooms of Polish monarchs that have survived wars and pil¬lages, and splendid gold and silver objects created by Western European and Polish goldsmiths. Diverse weapons, armor, and parade saddles and horse trappings from the Middle Ages to the 18th century are on view in the Armoury.

Oriental Art
Six galleries present carpets, banners and wall hang¬ings, Persian and Turkish arms, and Japanese and Chinese ceramics. The exhibition centers on a group of trophies taken in battle and other objects associated with King John III Sobieski and the Relief of Vienna in 1683.

The Lost Wawel
The exhibition weaves through the remains of the early 10th-century Rotunda of SS. Felix and Adauctus (also called the Rotunda of the Blessed Virgin Mary), 16th-century royal kitchens, 17th-century royal stables, and 18th-century coach house. Numerous objects unearthed in archaeological digs are on display. Architectural developments are presented on illus¬trated panels, a model of the 18th-century Wawel, and a virtual reconstruction of buildings from the early-Romanesque and Romanesque periods. Renaissance stone sculptures and stonework are presented in the Lapidarium.

Wawel Recovered
The new permanent exhibition on view in the medieval interiors of a group of Gothic buildings on the north side of Wawel Hill focuses on Wawel's history from the Poland's loss of independence in 1795 to the present day. It tells the story of the trying period of the Partitions, when the Poland's territory was carved up by Russia, Prussia, and Austria, and Wawel was converted into an Austrian military stronghold. During this period, some medieval buildings were demolished and the once-splendid royal residence was turned into barracks for the occupying army. The exhibition also recounts the history of the Poles' recovery of the castle from the Austrians and the decades-long restoration process, accomlished with the involvement of prominent painters, sculptors, architects, and restorers whose visions and designs were partially realized and can still be admired today. Experience the story of the castle's restoration through works of art, architectural details, arms, collectibles, large-format reproductions of period photographs and archival dokument, as well as engaging multimedia presentations and interactive computer programs.

Dragon’s Den
The Dragon’s Den is a cave that formed some 12 million years ago in the western slope of the hill. It is also home to one of Krakow’s best-known legendary residents—the Wawel Dragon. The route follows 81 m of the cave’s total 270 m of corridors. Visitors tour the cave and exit onto the Vistula Boulevards. Near the cave’s exit is Bronisław Chromy’s 1972 statue of the dragon that actually “breathes” fire.

Sandomierska Tower
One of the Wawel Castle’s two artillery towers, it was built in about 1460 during the reign of Casimir IV Jagiellon. The tower was adapted to accommodate firearms and artillery, but also housed guards’ lodgings. In peacetime, it functioned as a prison for persons of high social standing. Indeed, confine­ment in the higher stories—that is “in the tower”— was regarded as “honorable punishment” and was reserved for the nobility. A climb to the top of the tower is rewarded with sweeping views of Krakow and the surrounding countryside.

Royal Gardens
The Royal Gardens were reconstructed based on years of study and research on Renaissance gardens. The plants used and arrangements of pathways and beds as well as architectural elements evoke the atmosphere of gardens of the period. The gardens encompass an upper and lower terrace and a small vineyard.

Gardens, Courtyards, and the Church of Saint Gereon
guided outdoor tour
On the guided tour, visitors will learn about the splendid architecture and explore hidden gems, such as the sun-drenched Royal Gardens.
The tour begins in the exhibition “The Lost Wawel” and continues through the Bathory Courtyard, the archaeological and architectural reserve of the church of Saint Gereon and the church of Saint Mary of Egypt, the Arcaded Courtyard, the Tatar Passage, the northern slope of Wawel Hill, and the royal gardens.
LOG IN
REGISTRATION 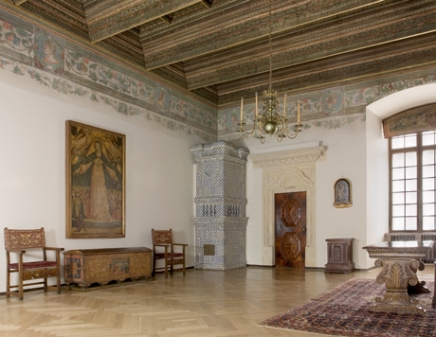